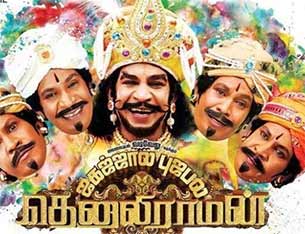 Art director Prabhakaran's realistic sets for upcoming Tamil period comedy "Thenaliraman" will be one of the highlights of the film, says director Yuvaraj Dayalan, who is mighty impressed with the former's work.

"Since it's a period film, huge sets replicating a fort and palaces were erected for the film. It cost us a lot but art director Prabhakaran's realistic sets have turned out to be very impressive. It will be one of the biggest highlights of the film," Dayalan said in a statement.

"A lot of research has gone into the making of the sets and the courtyard of kings, which will take the audience back to the long forgotten era," he added.

The film will be high on intelligent comedy, says Dayalan.

"Dialogues in the film have been penned by veteran writer Aaroordas. The lines have been written in such a way that they not only evoke laughter but also make audiences think throughout," he said.

Breaking
Breaking Fire erupts at NCB office building in Mumbai; No injuries ...
a minute ago

Madhrima Tulli & Ssharad Malhotra starrer “Pasta” gets an ...
4 minutes ago

Kareena Kapoor Khan’s 40th Birthday: Inside Pics give ...
21 minutes ago