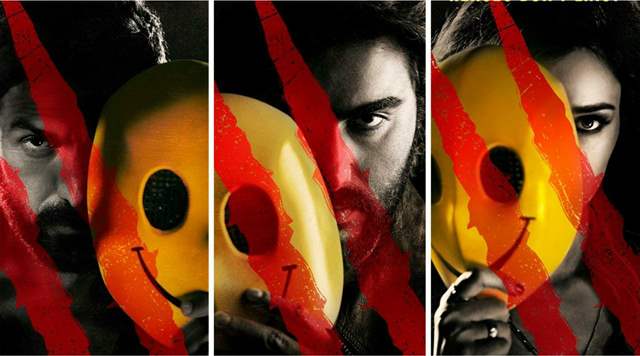 It seems to be a day of massive announcements and releases. As the world is trying to reel in the huge declaration done by actor Alia Bhatt that she is pregnant a while ago, everyone is trying to gradually come back to business and talk about the big movies coming soon.

One of the lot is the much-awaited sequel to Ek Villain, Ek Villain Returns. The 2014 romantic thriller was a massive success and even saw Riteish Deshmukh in a character like never before. Now, the sequel has obviously raised the stakes on all fronts as it will star John Abraham, Arjun Kapoor, Tara Sutaria and Disha Patani in lead roles.

And kickstarting proceedings just over a month before its release, makers released the posters of the actors in their respective roles with the iconic Ek Villain smiling emoji mask.

While, Abraham and Kapoor have the same stoic look as they look into the camera, Sutaria's look is much mellow and the small bindi on her forehead might mean that she plays a docile character that goes bad (probably).

It is however the poster of Patani that excites us the most. Hers is the only poster that doesn't reveal her face and instead only a stern eye. This raises the mystery level even more as to what will be Patani's character after all.

All four actors shared their posters on their respective social media accounts with the caption, "In the world of Villains, Heroes don't exist.. #EkVillain.. Returns to you after 8 years🖤🎵🔥 on July 29, 2022. You ready?"

The director of the original, Mohit Suri, returns to direct the sequel as well. Ek Villain Returns gears up for a release on 29th July 2022.

+ 8
1 months ago the promos have been so awkward. john doesnt want anyone in his personal space and the girls are so fake to one another

+ 10
1 months ago Ugh I dont know how Arjun Kapoor is still in BW industry. He cant act sorry.

+ 14
1 months ago Acting ki barbaadi hai yeh film! Only songs are going to be the nice thing about the movie