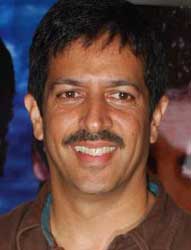 Bollywood filmmaker Kabir Khan, who is currently basking in the success of his recently released film 'New York', is busy taking care of his kids while his wife, popular host Mini Mathur, is shooting for a new TV show in Malaysia.

Mini is shooting in the jungles of Malaysia for Sony TV's soon-to-begin adventure reality show 'Iss Jungle Se Mujhe Bachao'. And Khan is taking care of their five-year-old son and less than a-year-old daughter.


'The jungle is not for kids and now that the film has released and received a fabulous response, Kabir has promised he will take care of the kids and will be shuttling over the weekends to catch up with me. I will definitely go crazy here after two months,' Mini said in a press release.


The Indian version of the British adventure show 'I'm A Celebrity... Get Me Out Of Here!' will go on air July 13. In the show, celebrities will be left in a jungle with the bare essentials needed to survive under adverse conditions.


Mini will be hosting the show with VJ Yudhishtir, popularly known as Yudi.