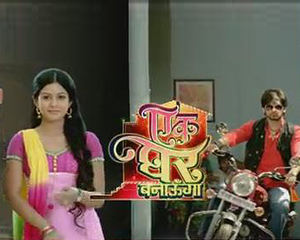 Tensions are not going away from the life of Aakash and Poonam in Rakesh Paswaan's popular show Ek Ghar Banaunga on Star Plus. Poonam (Ishita Dutta) and Aakash (Rahul Sharma) wants Prabhu and Vandana to get shifted to a new house which is nearby to their house but more problems are knocking their doors as the house is said to be haunted.

According to our source, "In the upcoming track of the show, the viewers will get to see Poonam that is shocked to learn about the house which she had purchased turns out to be a haunted one. In the first instance Poonam will refuse to believe that the house is haunted but since Kannu and Mangla (Neelima Parandekar) have  also witnessed something haunted in the house, they insist her to believe on the same. Mangala will also claim that she has seen the ghost in the house and later, Akash would not let Prabhu and Vandana to buy the house and to prove them right, Akash decides to stay inside the house for a night. Poonam calls Akash back from the house when she realizes that something is wrong in the house. Eventually, Poonam decides to look for some other property than this but due to some circumstances, she visits the haunted house again and she sees something shocking."

When contacted Rahul Sharma aka Aakash he said, "Akash and Poonam really wanted to make Poonam's parents shift to that house which is nearby to their house. They would be unhappy to know the fact that now they could not buy that property. The viewers will enjoy this track."

What did Poonam see in the house which left her stunned? The upcoming track of the show will unfold the hidden drama and reveal the mysterious secret of the 'haunted house.'