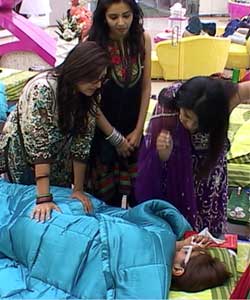 Presenting Pooja Missra once again making headlines in Colors' Bigg Boss Season 5 and this time she herself falls prey to her deeds.

A source describing the scene reveals, "Last night the inmates of the Bigg Boss house saw the unexpected entry of Swami Agnivesh after which the house saw an entire ambiance change. In the coming episodes, the viewers will see Bigg Boss giving them a task for which the Swamiji asks Pooja to perform with Amamr (Amar Upadhyay). As we all know Pooja and Amar do not get along so well and hearing Swamiji's demand, Pooja loses out and breaks down. This will be the first time that the viewers will see the strong and daring Pooja Missra breaking down."

Seems like emotions are steadily making their way to explode in the Bigg Boss house...

Starmoon 8 years ago Nobody is perfect in the BB5 house and they are all in there to win 'Hook by Crook' but the only person in the house who is not scheming any devious manipulative plans to instigate against one another is Pooja Mishra... She does not start a fight but finshes it saying one of her most spoken dialogues "Time out" or "Talk to my hand" or "Spare me" :)

Thaathi 8 years ago POOJA MISRAA, THE ONLY PERSON IN BIG BOSS WHO DOESNT FAKE ANYTHING ! THE ONLY PERSON, WHO SAYS WHAT SHE REALLY FEELS ! HATS OFF ! KEEP IT UP !

shikha_bhargava 8 years ago pooja is doing great showing wat she actually is unlike oders fake people...boohhh ...bt i didnt like when pooja fall un for sky's cunning brain...HATE thus MAN

DespicableMe 8 years ago its not a fake article. u can see in uncensored videos section on BB site.

ceejay 8 years ago ur an original Pooja. all the best!

jasmine95 8 years ago pooja misrra love you for being real. You rock.

RagMasta 8 years ago Oh My GOsh!! She did not even cry..such a fake article to seek sympathy votes