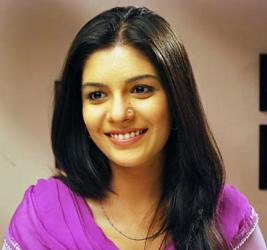 Rashmi Desai was recently in news for shooting a commercial ad with the one and only 'Salman Khan'. And now it is the turn of our dear Pratigya aka Pooja Gor to share screen space with the talented actor.

We hear that Pooja was jubilant and over the moon as soon as she got this opportunity. And it is a dream come true for her, as she claims to be the biggest and most loyal fan of Salman Khan. It seems she has not missed even one film of the actor, and has in fact watched them over and over again!!

Our source states, "Pooja has recently shot for the commercial with the Dabangg star, Salman Khan. This is the first time that Pooja has stepped into the world of ads and endorsements. She had a great time shooting with him".

When asked Pooja about the experience she says, "I had a great time shooting with Salman as he's extremely down-to-earth! I had heard stories from others, so I wasn't surprised when Salman invited me to have lunch with him during our shoot. And what many may not know about Salman is that he's a really creative actor. He was giving great inputs during our shoot for the betterment of the ad and Salman really puts in 500% into his work."

"He is a real rock star and a great inspiration," Pooja echoed.

When asked her about doing more ads she says, "If it's a good brand and an interesting product, why not? But yes I would want to see the response to my first ad before I step into any more commercials. It's been a good experience though, so I wouldn't mind."

We wish Pooja all the very best for her future plans..

Faiza. 9 years ago all the best poooooooja. i love u so much

shrutisinha 9 years ago Congrats Pooja!! Keep it up....God Bless u

anyways shes lucky to work with him!!

..CountingStars 9 years ago Woahhhh What A Lucky Gal!!
Congratz!

Sara Ali Khan heads to Mumbai as she receives summon from ...
14 minutes ago

Bigg Boss 14: First look of the shopping mall, theatre and ...
23 minutes ago

exclusive
Exclusive Ashnoor Kaur on music video with Millind: It is something ...
44 minutes ago