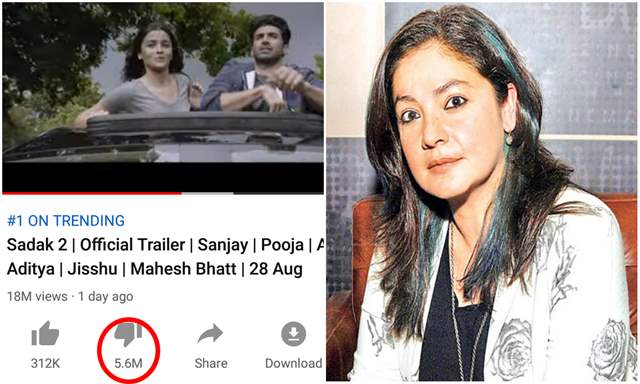 The trailer has been receiving a harsh response from the audience who are 'disliking' the trailer in huge numbers. Pooja Bhatt has broken her silence against the backlash and thanked the trolls for trending the Sadak 2 trailer. She tweeted:

“Lovers/Haters two sides of the same coin. Gotta hand it to both for giving us their valuable time and making sure we are trending. Thank you for your wishes."

Her mother Soni Razdan seems impressed by her fierce response and lauded her as she wrote: “Smart girl and absolutely true.”

The Sadak 2 trailer released on Wednesday and has turned out to be the most-disliked video on YouTube in less than 24 hours later. The trailer has received 5.5 million ‘dislikes’ on the video with more than 15 million views, which has in turn made the trailer trending on YouTube.

Besides, a musician has also claimed that a song from the film has been copied from his 2011 Pakistani composition.

Earlier, Mahesh Bhatt had said in a message that he isn’t bothered about the fate of the film. “Today as we begin the last leg of our journey.I feel unshackled! I carry no burden, no weight. No reputation to hold on to. No mission to accomplish. Nothing to prove to anyone. If the film works it belongs to all of you. If it does not, it’s mine,” Pooja Bhatt shared in a post.

Sadak 2 will release on Disney+ Hotstar on August 28.