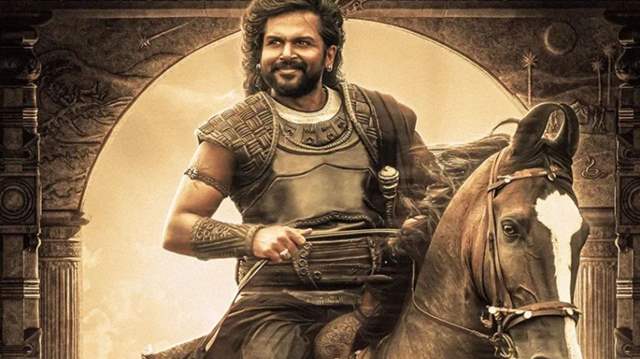 The makers of Ponniyin Selvan are releasing new poster to introduce the film's impressive cast as it prepares for release. The creators today published a new poster of Karthi to present him as Vanthiyathevan, a swashbuckling adventurer, a spy, and a prince without a kingdom, following Chiyaan Vikram's portrayal as the ferocious prince Aditya Karikalan. The actor's endearing smile in the new poster will undoubtedly win hearts.

Sharing the poster the makers wrote, "The Prince without a kingdom, the spy, the swashbuckling adventurer...here comes Vanthiyathevan! #PS1 @madrastalkies_ #ManiRatnam"

On September 30, "Ponniyin Selvan," the crowning achievement of Mani Ratnam, will premiere in theatres. It is a significant release for Tamil cinema and one of the most eagerly awaited movies of 2022. Vikram, Jayam Ravi, Karthi, Aishwarya Rai, Trisha, Sarath Kumar, Prabhu, Prakash Raj, Jayaram, Nassar, Vikram Prabhu, Parthiban, and Aishwarya Lekshmi are just a few of the actors who appear in the movie.

The film's OTT partner has now been confirmed by the creators in a new announcement. The post-theatrical streaming rights for "Ponniyin Selvan" have apparently been acquired by a well-known and significant Indian digital streaming platform for an unprecedented amount.

The news was announced on Twitter by the creators as confirmation. Produced in parts by Mani Ratnam, big-budget movie "Ponniyin Selvan" is presently in the post-production stage. The film's cinematography was done by Ravi Varman, and AR Rahman composed the score for it. Sreekar Prasad  handled the film's editing.

The movie Ponniyin Selvan is inspired on Kalki Krishnamoorthy's book of the same name. Mani Ratnam has been working on this dream project for more than ten years.

The film will be released in Tamil, Hindi, Malayalam, Telugu, and Kannada in order to achieve a pan-Indian distribution.

+ 4
2 months ago How many times i read the book ponniyan selvan🥰.. Excited for the movie

+ 10
3 months ago Why dont BW make this kinda movies. The movie looks fantastic.

+ 8
3 months ago k this movie looks really good. bollywood is gonna be so jealous lmao

+ 11
3 months ago This us one movie I am super duper excited for. The Novel is fantastic, could be very difficult to shoot with so many characters. Interested to see how it is brought out onscreen.Everyone has been casted aptly, Karthi as Vandiyathevan is going to be a treat to watch,