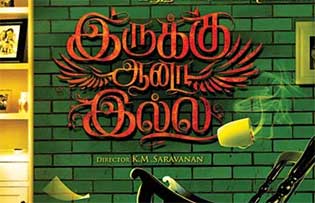 In forthcoming Tamil supernatural romantic-comedy "Irukku Ana Illa", actress Eden Kuriakosse plays an unusual fictional character, which will leave the audiences guessing about her presence in the film. She says pulling off the role was not easy.

"For every character, you have certain gestures to follow, but it was not the same with my character in 'Irukku Ana Illa'. It's a character that will raise doubts in the minds of the audience about my presence. Since it's fictional in nature, I didn't know which gestures to use to express," Eden told IANS.

"I had to invent my own gestures to express. Even when I'm sad and deeply upset, my character didn't allow me to cry. I still had to express the pain my character was going through. I could only do it with certain gestures I invented," she said.

Unlike other heroines in the southern film industry, Eden feels she was not just required to increase the glamour quotient in the film.

"Out of the 50 days of shooting, I was required for 48 days. I'm seen throughout the film and in some instances, I have more scenes that my hero. My team kept on saying I was the hero of the film as the story revolves mostly around me," she said.

"I'm glad that I was not merely used as a glamour element in the story. I play a very strong character and I feel I've done justice to it," she added.

Directed by K.M. Saravanan, the film features Vivanth in the lead. It releases in cinemas Friday.

Divyenndu on playing a badass gangster in Mirzapur series: I prepare ...