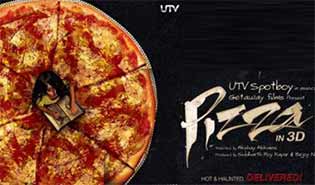 Newcomer Akshay Akkineni, son of National Award-winning editor Sreekar Prasad, says the idea of making his directorial debut with Hindi horror-thriller "Pizza" in 3D was an "added advantage" and that it will "immerse audiences in a never before experienced atmosphere".

"Pizza 3D" is the remake of an eponymous Tamil blockbuster, which was not made in 3D.

"When I was offered 'Pizza', I decided to make it in 3D because I felt it had a lot of untapped potential. Since most of the story takes place in a house, I felt 3D would be an added advantage to create a new atmosphere for audiences," Akkineni told IANS.

"I wanted to create an immersive space that can amplify the horror element in the movie. I thought it was only possible with the help of 3D," he said.

Although kicked about making the film in 3D, Akkineni's concern was "not to make a bad 3D film".

"I didn't want to mess up; so I did a lot of research and read too. My DOP (director of photography) and I took the help of our 3D stereoscopic partners and we managed to crack it in a week. But that one week was hectic because we were learning throughout. Finally, it turned out well and we're all excited about the product," he added.

Akkineni says "Pizza 3D" is an adaptation of the original with minor changes.

"There were a lot of unexplored layers in the original, which we have tapped successfully. We have also attempted so many new things with sound in particular. I strongly feel my film will work better as we've made it scarier," he added.

Most newcomers would hesitate to start their careers with a remake, but Akkineni isn't one of them.

"I never planned to start my career with a remake, but when this happened, I didn't want to lose the opportunity. When I heard that UTV was going to produce it and they were excited about the project, I thought there's nothing wrong in doing the film," he said.

While the original featured Vijay Sethupathi in the role of a pizza delivery boy, actor Akshay Oberoi reprises his role in the remake.

"Since we had already worked together, I felt Akshay would be perfect for the role. It's always easier to work with someone you've already worked with before," said the young director.

Akkineni says they explore different moods of the film.

"The idea of roping in four composers was to explore different moods. Each composer brings to the table a different genre of music. I like my songs to be acoustic, and background score to be heavy metal," he added.

His biggest challenge was working alongside his father, who has edited the film.

"All these years we've been father and son. Suddenly, when you expect us to be director and editor, it will obviously seem challenging because we can't mix personal and professional relationship. It took us a lot of time as we had different opinions, but eventually we both enjoyed working together," he said.

A south Indian by his roots, Akshay wants to return to the southern filmdom.

"Bollywood was not planned. It was always supposed to be a Tamil or Telugu debut, but since this happened, I couldn't work here (south). But I will definitely come back to the southern industry," he added.