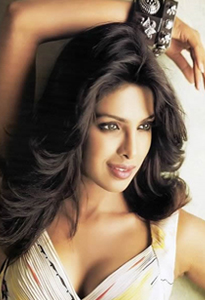 Vishal Bhardwaj's next in line, Ek Batta Saat, which casts Priyanka Chopra as female lead, is continuing to retain media attention. The film is inspired by Ruskin Bond's short story Sussana's 'Seven Husbands', where in accordance to the title, Priyanka will be seen with seven different hubbies. Vishal is assuring that the difference is evident in each case.


Priyanka, in a revival of her gray character portrayals, is to be a serial murderer in the film who kills all her men. John Abraham, Mohanlal, Naseeruddin Shah and Arshad Warsi have, as per the news, already been roped in, while Irfan Khan is next in line as a potential choice. Vishal's persistence in maintaining a stark distinction is obvious.


So much that on his recent trip to the US, he has finalized an essentially non Indian man to fill in one of the seven spots.


The script has been written jointly by Vishal and legendary author Bond.


As per our calculations, the cast is exactly one man shot. And wishful as we are here at BollyCury, we wondered if Mr. Bhardawaj would consider a chance of holding public auditions for this final man... the trendy lass Piggy Chop's last man?!

Exes Madhurima Tuli and Vishal Aditya Singh to romance each other ...