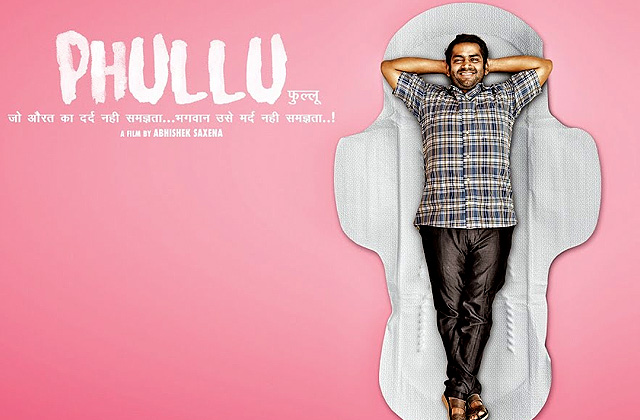 Good intentions, bad execution is the way one can sum up "Phullu", a film with a message and a wafer-thin plot. The subject itself is perhaps not even worthy of a full-length film.

Phullu (Sharib Hashmi) is a kind-hearted and helpful village boy, a good-for-nothing, according to his mother. He spends his time running errands for the village women, helping them by bringing their personal goods from the city for no cost at all. A chance meeting with a woman doctor at a chemist's shop in the city makes him realise the importance of hygiene for women and why they should use sanitary napkins instead of the customary cloth they do, to cut corners.

His motto then is to help women by creating an affordable sanitary napkin which they can all use and thereby safeguard themselves from infection. This forms the crux of this one and a half hour film.

The subject itself is a wrong choice for a feature film. While the message is strong, this cannot be the pivot around which the entire film can be hinged. While the first half of the film establishes Phullu's character and the setting, the second half of the film drags and is boring with no drama, twists or even entertainment.

The writing by Shaheen Iqbal shines in parts, especially in the scene with Inaamulhaq and also in certain scenes involving Phullu's mother.

Sharib Hashmi squarely carries the film on his shoulders and is sincerity personified, but the script limits him. He delivers on every front and is endearing. He is ably supported by Nutan Surya playing his mother and Jyotii Sethi playing his wife Bhigni. Inaamulhaq in a one scene role is brilliant.

The treatment of the film is more like a documentary or a public service campaign film.

The music by Troy Arif and Vickky Agarwal is light and refreshing and adds to the appeal of the film. The song "Manmatanga" by Desh Gaurav is well sung and soulfully rendered.

The cinematography by Simarjit Singh and Suman is a tad amateurish, especially in scenes where the hand-held camera is used. They however manage to capture the village beautifully with their wide angle lens.

Overall, the fault with "Phullu" lies in its poor script and not in the production quality of the film.