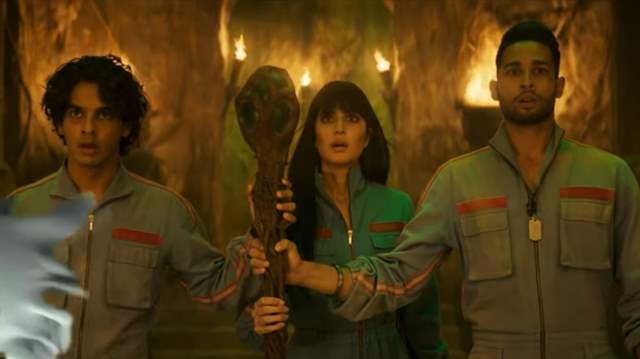 Ever since the audience saw the first poster of Katrina Kaif, Siddhant Chaturvedi, and Ishaan starrer Phone Bhoot the audience is eagerly waiting to get more glimpses of the film. Having not made them wait for longer, finally the trailer of this most awaited comedy of horrors is here and we guarantee it is the most haunting yet the funniest trailer you would witness this year.

Phone Bhoot has been the talk of the town for a long time now. While the film has been in talks for its interesting genre of comedy of horrors that it is about to bring for the audience, it has also kept the audience's attention for witnessing Katrina Kaif coming as the prettiest Ghost for the first time.

Finally, the wait is over, as the makers are here with the trailer to give us a glimpse of its horrifying adventure which is well-studded with a lot of hilarious and fun moments. The trailer is truly one of its kind that the audience will see this year in which Siddhant Chaturvedi and Ishaan can be seen playing ghost hunters while they meet the world’s most beautiful ghost Katrina Kaif and they altogether go on a fun and horrific journey with a business plan.

The trailer brings a lot of fun that the audience is waiting where on the one hand they will see Katrina making fun of herself than on the other hand they will experience a burst of laughter amid a lot of horrifying experiences.