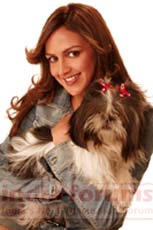 When Esha Deol arrived at a suburban hotel recently for a photoshoot of her forthcoming film Darling, her escort was promptly shown the door. Not the hotel's fault though, as the actress had brought along her most trusted companion, her pet dog. But Esha was quick-witted to claim that the dog was also part of the shoot. However, rules being rules, the request was turned down by the hotel management. Esha had to contend with playing with her dog during the breaks in the shooting schedule.

Word has it that Esha is so fond of her dog that she takes it along wherever she goes, even while traveling abroad. Best of buddies, it seems!