When Amar & Prem got together in Andaz Apna Apna… they created a laughter riot! Well, history repeated itself on Indian television when the duo just got together to play the %age game -10 Ka Dum! Salman as the perfect host had the thinking actor Aamir Khan with nephew Imran for the celebrity episode on July 4… and the duo recreated magic on the show once more after a decade. 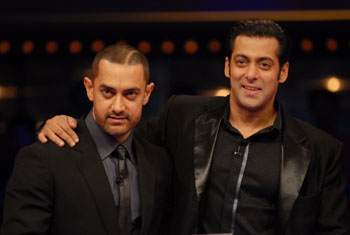 Featured Video
10 Ka Dum was indeed the most watched reality show this week, clocking a TVR of 3.4 and an 11.8 % Reach. The rating was as high as 6.9 in key markets such as Mumbai. The show was the highest rated reality show for the week, beating all the other reality shows such as Ek Se Badhkar Ek, Sa Re Ga Ma Pa, Jo Jeeta Wahi Superstar and Paanchvi Paas. The show was viewed by 10.4 million viewers in the Hindi speaking markets. Since the launch of 10 Ka Dum, the show has been receiving positive reviews from fans and viewers across the country. This celebrity episode was one of the most talked about and a classic case of appointment viewing, making it a 100 % success for the channel.

In these times of clichéd and run of the mill reality shows, 10 Ka Dum comes in as a breath of fresh air. Also Salman's natural exuberance with the contestants and great sense of humour has clicked with audiences across all age groups.

In the coming weeks there's more for the audiences to look out for! Stay tuned to 10 Ka Dum every Friday & Saturday at 9.00 pm only on Sony Entertainment Television.

it was best episode foreverrrr

aamir n salman totally rock together
n plus with the humour thy bth brought..it was excellent

+ 2
14 years ago wahoooo gr8 news¬ i watched dis eppy and loved it to da max! salman is the Ultimate BEST! he does wonders all the tym!

no one can b compared wid him! xxxxxxxxxxxx

14 years ago YAYYY.....glad it`s being so appreciated and love amir and salman =)

14 years ago Love Salman, He is the best. Love Amir too.

14 years ago yayy!imran rules the television aswell!lol.....but...i guess this was all cuz of amir....

+ 7
14 years ago Well done DKD. Sony deserves this. After all, the channel is a mastermind in reality shows.