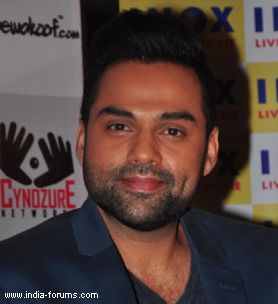 After putting up a brave front by choosing unconventional roles on the screen, Abhay Deol tried his hand at film production with "One By Two", but the film failed to impress moviegoers. The actor is undaunted and in no mood to "quit" as he believes that in life, "misses" are a bigger learning than "hits".

"Nothing is a mistake in life. A mistake only happens when you don't learn from it and I believe that people learn more from their misses over hits. So it ('One By Two') was a learning experience for me," Abhay told IANS.

The actor says one failed venture can't deter him from trying out new things in future.

"It has not put off the process of production for me. You can't quit. Why wouldn't you want to produce other films especially after learning so much from your first production venture? You're better equipped now for your second project," he added.

Directed by Devika Bhagat, "One By Two", which released earlier this year, starred Abhay himself with his real life girlfriend Preeti Desai.

The film was made for about Rs.15 crore and it managed an opening weekend collection which reportedly ranged only between Rs.1.25 crore and Rs.1.5 crore.

However, the "Zindagi Na Milegi Dobara" actor has decided to move on and is now working on his next production titled "Bounty Hunters". Once again, he is producing it and acting in it as well.

If reports are to be believed, he has joined hands with a Britain-based production house to co-produce the film. But Abhay, who was recently in the capital to be part of Mission Energy Sessions, organised by NDTV along with Grundfos Pumps India Pvt Ltd, wants to wait before confirming anything.

"That was something that the producer announced, but there was no movement happening on that front. I haven't personally spoken about that as I need a few things to be cleared before I talk about it. And those few things have not happened; so there is no point of talking about that," he said.

With nine years of experience in showbiz, he was last appreciated for his role in 2013 released film "Raanjhanna", also starring Sonam Kapoor and southern actor Dhanush. Now, Abhay is looking forward to a busy year ahead with his acting projects.

What's also taking up his time is an eco-friendly home in Goa.

Sharing his concept of making the house, he said: "I'm making it as green as possible. There are people who will rate the house and tell us how green it is. We will follow up and make sure that it stays green and also there are those who will give me ideas on how I can use the power and energy in the best way possible."