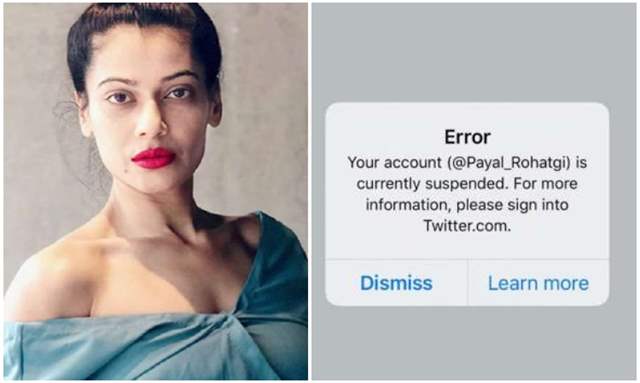 Actress Payal Rohatgi who often stirs up controversies has found herself in trouble. Payal is an avid social media user and does not shy away from voicing her opinions without mincing her words. She was recently in the limelight for speaking up about Sushant Singh Rajput’s untimely demise.

The former Bigg Boss contestant also uploaded a video with the title, "Why my Twitter Account is SUSPENDED ?????" Payal claims that she has not been informed of any reason for the suspension of her official account and that she has received no official communication on her email id from Twitter.

In her video, she claims that she never uses abusive language on Twitter and shares facts with the audience. "No reason has been given, no e-mail has been sent on my official e-mail id and my account has been suspended. I don't know what the reason is. It is for all of you'll to figure out with Twitter India that why have they deleted my account. Neither do I abuse people nor do I use any wrong word for anyone. I obviously attempt to share facts” she said.

In another video, Payal lashed out and said: “I want TWITTER suspended from India.”

Meanwhile, Payal’s supporters have started a trend  ‘#BringBackPayal’ on Twitter.