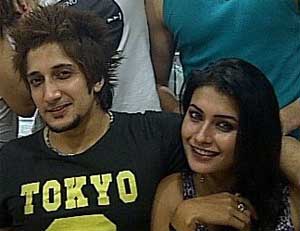 Love is in the air for Pavitra Punia, the lead actor of Star Plus' Love u Zindagi. Currently seen on Imagine's Sawaare Sabke Sapne - Preeto as Simran, Pavitra is in a dating Salman Sait, who was seen on the MTV reality show Roadies.

"The two met during Spiltsvilla and also later on did an ad together which never came on air but it was a turning point in both their lives. They started feeling for each other and decided to be together. The couple have completed one year of their relationship," reveals a source close to the actress.

Pavitra Punia confirmed the news but refused to divulge any details further.

destinylove 8 years ago who really cares if pavithra punia is single or ..dating or what..? She might be wanting publicity so get into giving such news..This is personal mater why should this be so much highlighted.. Reg the guy i dont know him so I cant say anything on him..Please stop giving such worthless news and waste our time

r07c 8 years ago @piya2025---Charlie dated his twin brother Nauman Sait...as for her she needs to stay away from Kunwar Amar!!!

adonis420 8 years ago SALMAN MUST HAVE COMMITTED A TERRIBLE SIN IN PREVIOUS LIFE!

Salman must be doing penance for sins committed in the previous life and that is why he is saddled with loud and annoying Pavitra Punia... LOL!
PAAP KIYA HAI TOU ABHI PAVITRA PUNIA KAMANA PADEGA..

papia 8 years ago Salman was not on Splitsvilla 3 and I am sure about that as I watched that. May be they met somewhere else.

But Salman tu to gaya...

piya2025 8 years ago umm he's the guy na who is currently in an open relationship with Charlie!,the girl who also keeps hanging around with Amar from DID..

HelloHunnyBunny 8 years ago what...when was salman a roadies contestant ?? nauman was there..but he was rejected in the auditions itself..
n was he in splitsss ...when ???

-MariaMars- 8 years ago bechaara... i really pity him.. pavitra ki real side was pathetic.. may be he's also like this, dats y tolerating her.. ewww.. anyways, good luck to him

paulomi_taAnu 8 years ago salman was dere in splitsvilla..how come i don't know... but really salman.. how do u tolerate pavitra and her attitude... neways all d best dude !!

mishti_17 8 years ago Poor him... No offence but Pavitra's attitude is bad.. The way she behaved in Jee Le Yeh Pal.. Gosh, she is unbearable.. I dont know how he tolerates her...