Mumbai, March 27 (IANS) Vidhu Vinod Chopra, producer of the hit Munna Bhai films, says it is not possible for filmmakers to predetermine what kind of movies will be popular with audiences. Most make cinema on the basis of what they are passionate about.

'I make the kind of films I do because I believe in them even though I have no idea whether they would go down well with the audience. I think all filmmakers set out to work on their films because they are passionate about them,' he said.

Chopra was part of a panel that addressed a session, 'What Kind of Films Work for Today's Audience', at the FICCI-Frames 2008 global convention on the entertainment business here Wednesday.

Explaining that no filmmaker has a formula for a hit film, Chopra said a true filmmaker would always be honest to the medium and leave the rest to the audience.

'Sometimes, their works click at the box office and sometimes they 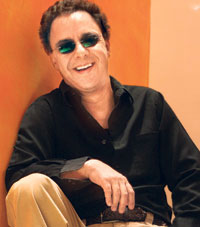 Chopra said that when he was planning to make 'Munnabhai M.B.B.S.', many people told him that it would not work at the box-office. But it did.

He also cited the example of 'Sholay' and said that when Ramesh Sippy was making it, many in the film industry said he had gone insane to make that kind of film.

'In the first few weeks of its release, the film limped at the box office. But eventually it turned out to be India's biggest blockbuster. Even Ramesh would not know why the film finally clicked,' Chopra said.

Shimit Amin, director-editor of 'Ab Tak Chappan' and 'Chak De! India', said filmmakers make movies because they have something to tell the audience.

'While in hindsight it is easy to point a finger with the aid of statistics and trends on the kind of films that should be made, but in the final analysis it is the filmmaker's passion about the subject that drives him to make the films he ultimately makes,' Amin said.

Director Sudhir Mishra felt that as the creative head of a movie project he did not worry about its box office prospects.

'As a director, when I pick up a subject, I am confident it would appeal to the audience. Otherwise, I would not have chosen it. In spite of that, we filmmakers often go wrong. This only proves the point that there is no formula for a hit film,' he said.

Martin dwelt upon the recent success of Bollywood movies in Britain and said that as against 53 non-British movies released in the country in 2006, last year only 25 were released.

Of these, Hindi movies, including 'Bhool Bhulaiya', 'Om Shanti Om' and 'Partner', accounted for 16 million pounds ($32 million) of the 904 million pounds grossed at the box office last year.

He said that a movie with a good story would always find favour with the audience whatever the trend at any given time.