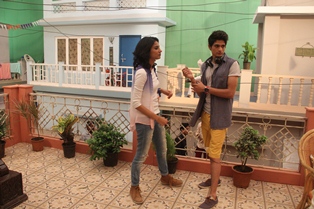 Dashing Parv Kaila recently got slapped not once, not twice but 30 times by his co-star Aneri for the upcoming scene in their show on Star Plus Nisha Aur Uske Cousins.

For a particular scene in the show, Aneri Vajani aka Nisha had to slap her on screen brother Parv Kaila who plays Suketu in the show but in order to get the take right, Aneri ended up slapping Parv 30 times.

After a point, the repeated slaps led to Parv's ear turning red. According to sources on the set, Parv took it in his stride and continued with the shoot without any complaints. He was seen asking Aneri to hit him hard so that he gets the exact reaction which the director was looking for.

Let's hope this 'thappad ki goonj' translates into TRP glory for the show and its cast.

TomJerry007 6 years ago lol 30 slaps :P :D
but that's so sweet of Parv that he took it on right manner & not otherwise.

Haisisterz 6 years ago Omg!!!
I just hope all the best for Parv!!

-GoluGudiya- 6 years ago Oh My! That's what you call passion towards work! Amazing Job! Parv Kaila and Aneri Vajani