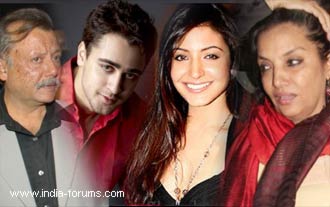 "I am the hugest fan of Vishal's work as a music composer and as a filmmaker, and so is my husband (lyricist Javed Akhtar). Yes, I am cast opposite Pankaj Kapoor who is an exceptionally talented actor," said Shabana.

She is paired with Kapur and this is Shabana's first film with the talented Pankaj since the highly-acclaimed "Ek Doctor Ki Maut".

"Technically, we've done two films together in the past. But I didn't have any scenes with Pankaj in 'Mandi'. We were together as a couple in 'Ek Doctor Ki Maut'. Pankaj was absolutely brilliant in that. It's always a pleasure to work with a challenging actor," said the veteran actress.

There have been many attempts to bring these two super-talented actors together but all were foiled by scripts that either one or both didn't like.

Apparently when Bhardwaj, who has earlier worked with Shabana in his first directorial venture "Makdee", offered her the part in MKBKM, she begged off wondering what would there be in it for her.

Earlier this week, Shabana went through a looks test for her part in the film. She will be sporting a very unusual look in this comedy where nothing is as it seems, including the actress.

Hopefully Shabana's makeup would make her look less scary than she did in "Makdee".

The Padma Bhushan actress laughed and said: "For the witch's role, Vishal and I went the whole hog. To this my poker-faced husband's comment was, 'To play a witch why did you have to put on makeup?' Can you imagine? My own husband," said Shabana.

Incidentally, the actress is one of the minuscule minority who thinks Pankaj's directorial debut "Mausam" was remarkable.

"Both me and my husband loved 'Mausam'. I think it has something to do with the Padma Bhushan. All recipients of the honour love 'Mausam'," she said