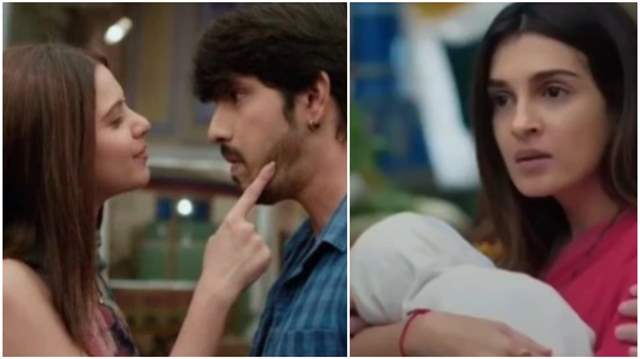 Star Plus show ‘Pandya Store’ is getting the love from the audiences. The current track of the show revolves around Dhara being scared of Chiku going away from her life. Rishita has learned about Shweta’s plans. In the upcoming episodes, Shweta will be seen having an emotional break down. Shweta steals Gautam’s alcohol and consumes the same. Krish sees this and tries to stop her.

Furthermore, Shiva is seen being insecure of Raavi and Arnav’s bonding. He gets irritable because of the same and talks rudely with Raavi. Krish talks to Shweta as she vents out her thoughts about the entire scenario that she has landed herself in. Krish feels bad for Shweta. He sees Dhara being extremely upset thinking about Chiku going away from her life. Krish feels upset seeing Dhara’s condition.

As informed by India Forums, Krish will be seen proposing marriage to Shweta. Now, we have interesting update regarding the upcoming track of the show. In the forthcoming episodes, Dhara will get to know about Shweta’s truth and she will be shocked learning the same. Shweta’s parents make Chiku their rightful heir and Dhara as guardian. Shweta’s past will further be revealed and the struggles that she faced. Later, Dhara would learn about Shweta’s truth of manipulating Pandya family to run away.

‘Pandya Store’ is produced by Sphere Origins. The show has a stellar star cast including actors like Shiny Doshi, Kinshuk Mahajan, Kanwar Dhillon, Alice Kaushik, Mohit Parmar among others.

+ 3
2 months ago Where is Shiva & Raavi’s happiness, progress, growth, their studies, them speaking up against obvious & well played out family partialities? Fights on repeat mode don’t work, when the growth happiness is not explored with equal zeal. This is a daily show, not reels- that you can keep throwing same content over and over again.Since last August, one full year + now, all they are showing is Shiva & Raavi’s misunderstanding, insecurity, separation, even death. And every track ends with Bhabhi paratroop ing Then 2 episode worth Khushi & back to fights for randomest of the reasons. Bhabhi’s something or maa’s kasam or creep suggested by Krish.Enough! Not interested in watching one more fight.Bring Shiva’s education track back, as it was reported by you India forums.

+ 11
2 months ago As for Dhara, knowing the truth about Shweta, what will she do? She is anyway going to go ahead with Krish-Shweta marriage because she desperately wants Chiku, will do anything to get him. She will brush aside Shweta’s crimes and make the family understand how the girl is the right fit for their family. Nothing in Pandya Niwas without Dhara and she controls everything in that house, starting from how and when the family members can breathe🙄

+ 11
2 months ago Kya hi boloon iss bakwaas ke baare mei🙄It’s the same track repeated between Shiva- Raavi, every month. It’s like the sasta writers can’t think of anything worthwhile between them. They both went all the way to divorce for the same reason, remarried, talked it through, that’s what we all thought, but its the same thing again and again, It is becoming irritating to see their tracks anymore. If they take step forward in their relationship for couples of episodes,, the writers make them take thousand steps backwards in the subsequent episodes. It is just becoming tiring and boring too.