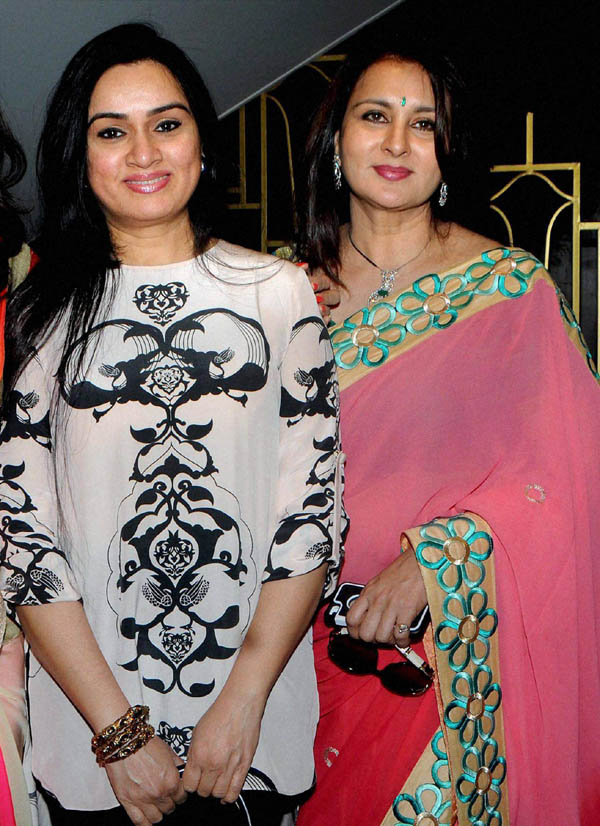 Veteran actress Padmini Kolhapure will soon be seen in Sony TV's Ek Nayi Pehchaan. She is a well know Bollywood actress and her entry in the show will be marked as her TV debut.


Our source says, "Padmini Kolapure will be seen as the 2nd woman in the life of Suresh Modi (Sooraj Thapar) and she might be Suresh's another wife."

As seen in the last episode that Modi family's maid receives the courier which is sent by Mr. Modi to Mrs. Modi which makes everybody happy along with Sharda that her husband had sent a gift for her. But soon it will be seen that it was not actually for her it is for somebody else and that somebody else is none other than Padmini.

We contacted Poonam Dhillon to know about her experience working with her good friend after a long time and the actress said, "I am really happy and excited to work with Padmini as she is a very good actress and is perfect for the role. When the creative were looking out for an artiste to essay this role I obviously gave a suggestion and recommended Padmini's name however, the decision completely depended on the channel and the creative whether to cast her or not. But they liked my suggestion and they agreed that she is perfect to play the character which they are looking out for."

She continues saying, "We will start shooting for the promo soon. I have seen her once in the look which she has donned in the show. Her look is very much different from Sharda and she will be seen in a glamorized look. I am looking forward to work with her."

As of now I don't know about her track completely but I can just say that with her entry the audience will witness a great twist in Sharda's life," she ends.

We wish Padmini Kolhapure all the best for her debut show!

souroj 6 years ago Though I hate this track, Sharda will emerge stronger.She will not forgive Suresh so easily

brainychild92 6 years ago This can be a good track, depending on how they handle it.

*Dev.* 6 years ago this is plain shocking

ENP is such a enthusiastic show with shardha and sakshi's journey so why they are introducing another lady in that boring man's life. he is already a bore , I wonder how come he has another women who can tolerate a man like him. Indeed, he proved that he is shameless man.

anyways, just hope the show doesnt ruins its plot by this stupid twist.

silvermoonlight 6 years ago Well thats great...and what will the CV do?

Suresh will of course be forgiven by Shardha and welcomed back with open arms.

Sakshi will smile and take that as a lesson from her guru "If my Karan cheats on me, then I will too forgive him"

Suresh needs to be dethroned, kicked out of the house. I want to see something between Shardha and her instructor..he respects her at least and instills confidence in her

Maybe that is what the show should be about...how people change in marriages and then move on

Kind of like Rani in Queen, where she decides what she wants in her life after a tragedy (KR was fab in that movie..Rani is the cutest character I have ever seen on Indian cinema)

Anyways it seems like CV are shitting all over this show..let the crap begin...

suresh555 6 years ago As long as Sharda gets to take her no good MCP hubby to laundry later, I am ok with it. She should divorce him and take all his money (after all the companies are under Sharda's name), However I doubt this will happen as they will show more rona dhona and abla naari nautanki

kryanfan1 6 years ago NOOO..!!
I really hope the track comes out to be good and the CV's dont drag it like the adi track..!! :(
Love enp

Fun_Reloading 6 years ago I knew there is something fishy about suresh modi.! This show is good and giving good message please dont drag typical family drama here.. Karan sakshi are awesome

Gagani 6 years ago Padmini was the 1st choice to play sharda,s role. Now she is going to enter in Ek nayi pehchaan, i am very happy.

Kryan_SanDhir 6 years ago This is NOT what I wanted to see in this show.. krystle Dsouza rocks n Ek Nayi Pehchaan rocks