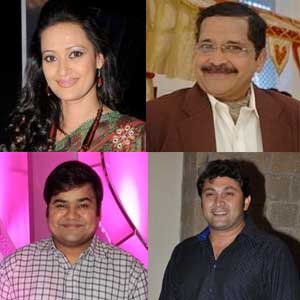 There have earlier been reports saying that Optimystix Productions who have the Baal Veer on SAB TV are coming up with a new show on the same channel. It was earlier said that the show is titled Jai Veeru but that is not the case.

According to a reliable source the show has got a new title, "It is now titled Pritam Pyare aur Woh! The show falls in the horror comedy genre and is the first Indian ghost buster show."

While the actors have been finalized the time slot is not yet confirmed, "Tiku Talsania, Jaswir Kaur, Rajesh Kumar, Siddharth Sagar and Prasad Barve have been confirmed for the show and they have also shot for couple of days for the same. It will be a daily show but it has been put on hold as the channel has not yet confirmed the launch date and the time slot. It was earlier scheduled to go on air from the 27th Jan and then we heard it was 3rd Feb but nothing has been confirmed as yet. The decision will be taken soon and the date fixed."

"The story will focus on this family which has Tiku Talsania as the head of the family and Jaswir will play his wife. Rajesh Kumar will be seen as the ghost and will bring in the fun element."

We tried to contact producer Vipul Shah from Optymystix Productions but he remained unavailable for comments.

No single promo on chanel so atleast 1 more month , i think

Rubina is doing excellent as new Jeannie but if Ali Asgar will ready to quit show, it will be surely closed