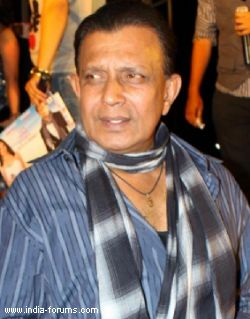 National award winning actor Mithun Chakraborty, who has been in the industry for almost 36 years, feels that only talent that can help an individual carve a niche in Bollywood.

'If you've got talent, no one can stop you from achieving success in your field. No one in my family was ever related to the film industry. No godfather can help you. I didn't have any godfather,' the 61-year-old said at a press meet for the third season of dance reality show 'Dance India Dance'.

After starting his career with offbeat 'Mrigaya' in 1976, Mithun carved a niche for himself in the comercial Hindi films with hits like 'Disco Dancer', 'Pyar Jhukta Nahin', 'Ghar Ek Mandir', 'Ghulami' and 'Agneepath'.

Currently the actor is gearing up for his small screen stint as the grand master on 'Dance India Dance'.

Talking about the best dancers in the industry today, he said: 'I have always said that Hrithik Roshan is a fabulous dancer. Shahid Kapoor also dances very well. They have it in them and they have proved it.'

Mithun also feels that dancing styles are changing with time and one has to adapt to such changes because 'people get bored watching the same style again and again.'

Meanwhile, the actor is active on big screen and he has just wrapped up Sajid Khan's 'Housefull 2'.

He was also seen in 'Golmaal 3' in 2010 and also starred in Bengali films 'Nobel Chor' and Mahesh Manjrekar's 'Ami Shubhash Bolchi'.