View Profile
An array of slaps was witnessed recently at the sets of Mere Brother ki Dulhan, awarded to none other than Khan-next-door Imran by Brit babe Katrina Kaif!!

Turns out Imran is learning a lot more about 'originality and perfection' from mamoo Aamir Khan, for he insisted on getting slapped in real for a scene to be shot in the movie. Above and beyond fake slaps, he was!
Not surprisingly, authenticity came at a price!

If he had imagined to have the slap shot sequence done and wrapped up in one take, boy, was he wrong! The number to be highlighted is 16. That's how many times the retake was done, and also the number of times Kat slapped Immu. 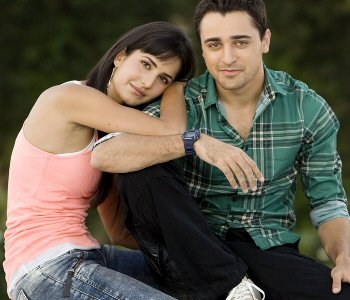 Imran, true to his intention, had himself hit 16 times, so they ended up with plenty of shots to select and edit from.
Katrina we hear was happy with one time, but Imran's own insistence raised the number. To add to this is the fact that there was a counter set up to track how many slaps he got!!
Consequently, Imran Khan, not a real life superhero was in pain of course. While Katrina might not feel proud, she can satisfy and shut her critics for once, for looking authentic in her act, ha ha!
Simple adage applies - no pain, no gain!