Zee TV's Pavitra Rishtha, produced by Balaji Telefilms will have a one hour Special Episode this Thursday, June 25th which will see a major twist with Archana's (Ankita Lokhande) marriage with Satish being called off. 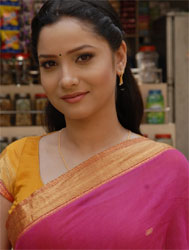 Featured Video
According to our source, "The attempts of Rasika, Manjusha's mom to stop Archana's marriage from happening finally bears fruit when Satish and his family are forced to believe that Archana is into prostitution".

Elaborating on the story line, our source quips, "It so happens that Archana gets a call from an unknown person that one of her sisters has met with an accident, and she has to come to a particular address to take her along. Archana rushes to the said place, where Satish is also brought by the anonymous caller to check out on Archana's adultery. The place happens to be a brothel, and Archana enters it unknowingly. At the same time, a police raid also happens and the girl's image is totally tarnished. All this eventually leads to Satish and his family breaking off relations".

The coming episodes will focus on Archana crying over her ill luck. "Archana will be so heartbroken that she decides to hang herself, but is saved at the right moment by her brother Vinod. Meanwhile, Manav (Sushant Singh Rajput), the silent lover of Archana also gets to know that there is someone who wants to spoil Archana's image", adds our source.

Will Manav help out Archana in her struggle?

All this and more in Pavitra Rishtha…

13 years ago my best friend riya sees this program.i knoe she is sooo attached 2 dis program as i am 2 mjht.now she is gonna b sad.

+ 2
13 years ago oh no poor archana
btw isnt ankita lokhwande a part of zee cinestars...i mean she was the 04 version.

13 years ago thanx for da info, i really like da show.

appledmg 13 years ago i like this show its very nice . I never knew this was balaji telefilms because it does not start with KKKKK haahahahahahahahahha