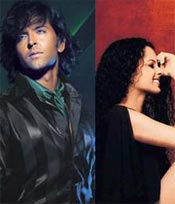 Hrithik is one of the finest dancers in the industry. Sharing dance floor with him is not less then a challenge for any actress. In his upcoming film "Kites" he is casted opposite to Hollywood actress Barbara Mori. Even Kangana plays an important role in the film. Recently, she shared the dance floor with Hrithik. She has shooted a song with him for this film.

According to Kangana, she is not a great dancer but as we know, Hrithik is very helpful co-actor. He helped her out with the dance steps and made her realize that she can dance well. She plays an Anglo-Indian in the film and is very happy to work with actors Hrithik and Barbara.


This film is still under post production and will release after a long time but before that we can see Kangana playing a role of a model in Madhur Bhandarkar's "Fashion".