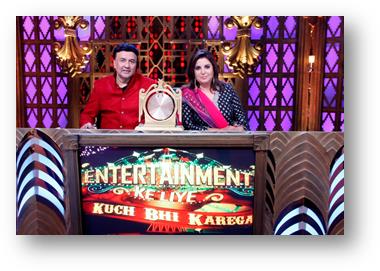 Ever since Ranbir Kapoor did the 'towel dance' in "Saawariya", it has caught the fancy of several actors. And this time, the bug has bitten singer-composer Anu Malik!

On a new episode of reality TV show "Entertainment Ke Liye Kuch Bhi Karega", to be aired Tuesday, the "Jaanam samjha karo" singer will be seen entertaining the audience by performing a towel dance along with comedian Krushna Abhishek, the show's host.

The idea came up when two contestants performed an innovative towel dance to entertain the judges. Krushna's co-host and actress Mona Jaswir Singh challenged him and judge Anu to perform the towel dance.

Both of them took the challenge seriously, and made their way on to the stage to entertain the viewers, said a statement.

The Sony Entertainment Television show is co-judged with Anu by choreographer-filmmaker Farah Khan.

samicute 9 years ago thank for the information