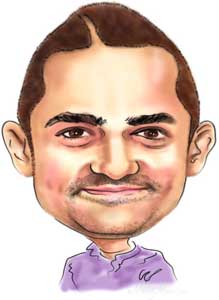 Known for his experiments, Bollywood star Aamir Khan will now be seen in an animated avatar for the first time in a television commercial for Coca Cola.

Conceptualized by adman-turned-lyricist Prasoon Joshi along with Ashish Chakravarty, the ad has been shot by Abhijit Choudhary for the 'Coca-Cola Open Happiness' communication initiative.


'It is a very interesting concept as for the first time my features have been replicated as an animated character through special effects. I think the robotic animated look has really come out well in the film and I hope that my fans will like me in this new animated avatar,' said Aamir, Coca-Cola brand ambassador, in a statement released here Thursday.


The ad showcases two girls searching for their friend (Aamir) who is so engaged in playing videogames that he has become a part of the virtual world.

But when the girls open a bottle of the aerated beverage, Aamir starts to lose his focus from the game and is tempted to come out in real life. The ad ends with Aamir's rival from the game, another animated character, also stepping into the real world to taste the drink.

Hathras case: Kangana Ranaut says 'Have immense faith In UP ...
3 minutes ago