View Profile
MUMBAI, February 27 (SAMPURN): In a significant move, the police have registered a non-cognizable offence against Bollywood actor 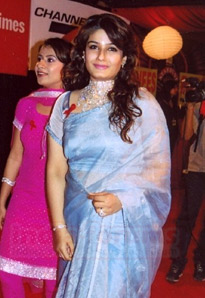 Featured Video
Raveena Tandon allegedly for ill-treatment of watchman of a housing society in suburban Khar. According to the police, the actor went into frenzy and allegedly assaulted the guard when he disallowed her from parking her vehicle inside the complex.

A complaint has been lodged with the police station by the office bearers of the Skylark Apartments on behalf of the watchman Ramji Yadav. In the complaint, they have alleged that when the watchman refused to bow down before Raveena’s fancies, she threatened to file a molestation case against Yadav.

The report said that the incident occurred on February 22 when Raveena had gone to drop her daughter at a coaching class in the building. It was then that acting according to the society’s rules, the watchman debarred the actor from parking her vehicle inside the building compound. Not ready to take things easily, Raveena argued with the watchman saying that since her daughter was attending coaching classes in the building she should be allowed to park her vehicle inside the compound. When the guard refused to oblige, Raveena allegedly pushed him, the police said.

The police further said that the complaint also alleges that Raveena was just about to hit the watchman, but the latter was saved owing to the timely intervention of two flat owners of the society. Now the police are waiting for the court order to initiate action against the actor. - (SAMPURN)