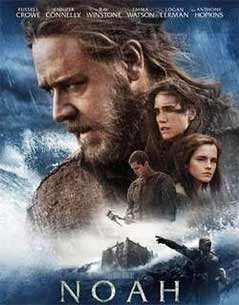 Set on a vast canvas with appealing visuals, "Noah" is a fantasy laden, blinkers-on, one dimensional portrayal of the biblical character of the same name. And in no manner does it resemble any epic from the same genre, ever seen before. With computer generated images merging with ash-barren locales, this is a very modern take of a biblical film.

The prelude, taken from the bible, establishes that god here, continually called "The Creator", is disappointed with mankind for various reasons and intends to destroy the world.

Whatever your belief or how much you believe or don't believe in the story itself, the tale of Noah (Russell Crowe) is fundamentally a testing account of a man who has visions, of death and destructions by water. He also sees life emerging from barren land and realizes the Creator's plans.

So, over a cup of tea, Noah tells his grandfather - the wise old Methuselah (Anthony Hopkins): "I saw death and I saw life. To which, Methuselah replies, "We are entrusted by tasks greater than our desires. So follow the Creator's plans."

Realizing his mission, Noah decides to build a massive Ark, which will hold animals and his own family, all of whom will be the key to restarting society all over again, once the Creator has wiped out the sinful incarnation. This forms the basic crux of the story.

In this endeavour, Noah is assisted by his wife Naameh (Jennifer Connelly) and his sons Shem (Douglas Booth), Ham (Logan Lerman) and Japheth (Leo McHugh Carroll). There is also Ila (Emma Watson), who they had once saved from death and raised her as one of their own and the Watchers, the film's version of the biblical Nephilim, fallen angels exiled to earth for their loyalty to mankind and imprisoned inside towering granite bodies.

They never question Noah's declaration of his absolute alleged insight into god's will.

The Ark is built, the floods arrive and the dove flies in at the end with the olive branch in its beak. The basic elements of the story are all here. But it is what the director does in between and around the core story, that gives "Noah" its inimitable and intriguing identity.

In this version, "Noah" is portrayed by the writers Aronofsky and Ari Handel, as a complex character, almost an obsessive follower of god, a zealot who finds himself at the crossroads when to, "follow the temptation of darkness or the blessing of light".

It is interesting to see Noah's take on what he thinks is right. This dichotomy of Noah's actions and beliefs, as well as the constant struggle between him and his family and society at large, makes the film interesting.

The film is an ensemble affair, where every member of the cast has an interesting character graph. And thanks to the script, they deliver. Crowe plays his complex, yet intricate role with sincerity. He is aptly supported by the rest of the cast. It's only the debauched villain, played by Ray Winstone, and Anthony Hopkins who tend to be stock characters.

Visually, Matthew Libatique's camera work fittingly captures Mark Friedberg Production's designs. The Ark is unique and fascinating. The computer generated images of the roaring sea, the birds, animals and reptiles heading towards the Ark are enthralling.

It is only the recurring image of the snake and apple that Noah sees in his visions along with the dramatic silhouette scene with orange and blue skyline, which are amateurishly conjured.

What takes away the punch off "Noah" is the straightforwardly structured five-act plot. Here, most of the inciting moments of the main story and its sub-plots are conveniently layered, logically leading to cliches, which strikes you only while reflecting.

Overall, "Noah" is a stimulating piece of art in 3D.