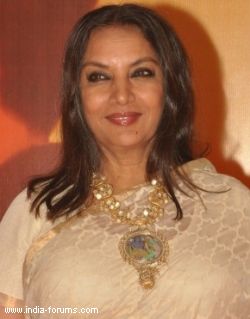 Shabana Azmi is happy she doesn't need a surgery for her fractured shoulder. But the restless and workaholic actress is upset about the complete rest that she has been advised.

'Thankfully, no surgery required but four weeks of NO travelling and then six weeks of intense physiotherapy required. Not looking forward to it,' Shabana posted on her Twitter page.

A few days back, she had posted: 'Have fractured my shoulder and need surgery! Disappointed about missing out on wedding, but things without remedy should also be without regard.'

At 61, the veteran actress keeps herself busy with films, theatre and several social causes.

Hrithik Roshan-starrer upcoming 'Agneepath(2012)' has reportedly fetched a whopping Rs.41 crore for its TV rights, and trade analysts feel the film, releasing Jan 26 next year will definitely bring good business to the industry.

'Satellite prices have been zooming up in recent times. But 'Agneepath(2012)' has definitely set a record. While I'm not aware of the exact price that the rights have been sold for; I'm told it is an astounding figure,' said trade guru Taran Adarsh.

'I'm not shocked with this piece of information or the reported price because as I said, Hrithik's movie rights including that of 'Kites' was picked up for a huge amount. The actor is one of our most dependable superstars and obviously there is a rush to buy the rights of his movies.

'To me, the month of January is looking exciting because of 'Agneepath',' added Adarsh.

Trade journal editor Vajir Singh too feels that Karan Johar's production, a remake of his father Yash Johar's 1990 classic of the same name, will rock the box office.

'Agneepath(2012)' had the buzz from the time the first promo aired. It is a natural thing; you have so many A-listers associated with this film. The fact that 'Agneepath(2012)' is a part of the Dharma bouquet and has actors like Hrithik, Sanjay Dutt and Priyanka Chopra in it is enough to give the trade and the general public an adrenaline rush.

'Agneepath' has been directed by Karan Malhotra.

Sonam Kapoor is set to get into the garb of Santa for a new TV show, but if given a choice, she would like to play Santa to Bollywood boys Ranbir Kapoor and Imran Khan.

At the launch of UTV Stars' latest show 'Superstar Santa', Sonam was asked if she was to play Santa to two people in Bollywood, who would they be?

The tall and slim beauty gave a confusing reply, saying: 'You know in earlier days, two actors had no issues working with each other. Like for example, Shah Rukh Khan and Salman Khan have worked together and even Salman and Aamir Khan.

'But these days that never happens! We never get to see competing actors together. Ranbir and Imran coming together will be perfect. But it just doesn't happen,' she said.

Perhaps Sonam wants to be a Santa to bring the two actors together on screen! For now, she is gearing up for the show, in which she will help common people in solving their personal woes.

The show will feature one celebrity each week, and they will solve issues relating to friends, families and even romantic relationships.

Commenting on her association with the show, Sonam said: 'Life is too short, if you fret and be upset, you will regret. So be the bigger one and nip the problem in the bud; smile, love and be happy.'

The show is being produced by Red Chillies Idiot Box. It will go on air Jan 1 next year.