Darshan Pandya was just another middle-class boy until his obsession to follow his dream and his guts to go about it, turned him into a known face in television. We would recognize him as Aditya Verma, Antara's father in Zee TV's Aap Ki Antara.

The staunch introvert that he is, he slowly opens up about his origins, friends, his better - half and more... 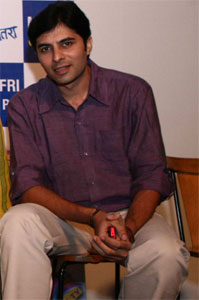 Featured Video
Tell us about your background.
Well, basically I'm an Amdavadi, that is from Ahmedabad. I grew up there with my parents and my younger sister. I came to Mumbai to do my Engineering.

So you're an engineer too?! Specialized in -
My specialization is in Electronics and Telecommunication which I did from S. S. Jondhale Polytechnic near Dombivali.

How did the transition from engineering to acting happen?
Well I always knew that I wanted to be an actor. But didn't know how to go about it, so continued with the known path. I took up a job after my engineering and during this time one of my friends introduced me to theater. When I got a role in one of the plays, I got so excited I quit my well-paying job to concentrate on that!

Any training that you underwent for acting?
Yes, at Bharatiya Vidya Bhawan there is a training center where I did my preparation.

What have been your theater activities so far?
Well there are many but my favorites are Mareez and Raman Bhuman.

How did Aap Ki Antara happen to you?
My friend Bhuvanesh, who works in the television field, told me about Aap Ki Antara. That's how it all started.

How different is television from theater?
In theater it's live-performance whereas in television its not so. Also in television you have to worry about continuity. Sometimes, you have to make sure your face shows the same emotion after a gap of few days!

What do you think is the plus and minus of being seen on television, or working on television?
Minus, I haven't come across as I'm a new comer in this field. But one advantage that I've always known about television is the fact that it reaches a wider spectrum of audience compared to theater.

Why did you choose such a sensitive subject for your debut on TV?
Simple. Because it dealt with something that a television serial had never tackled before.
But I'll be honest, I was terribly nervous about the project. I had no idea if I'd be able to pull it through.  But I also knew that the only way to success was by taking risks. For me, No risk equals no gain.

Tell us about your real life interaction with autistic children.
I interacted with them when the whole crew was taken to an autistic school.  I found that all autistic children are brilliant. Their mind is such that they focus only on one thing. This makes them so specialized in that field that they turn out to be geniuses. For example, there was this girl who was fond of languages and she knew seven of them! Then there was this boy who was fond of singing, so he knew hundreds of songs by heart, not leaving out a single word!
Their minds are pure. They have the absolute form of innocence.

Your producers too debut in television with this show. How is it working with them?
Well my producer is damn creative! We famously get along with each other. He has also helped me learn a lot of things about this field.

How similar or different is Darshan Pandya from Aditya Verma?
Well, the similarity is that my moral values match those of Aditya's as we both are from middle class families. But Aditya gets serious very soon. I'm a lot calmer than him. I don't worry about future as much as Aditya. I take each day as it comes.

Your first role is of a father. Did you feel apprehensive?
To be very frank, when Bhuvanesh told me about it, I blatantly refused. He told me at least go through the script, think over it. I took his advice and when I realized that this serial is a totally new concept, my attitude changed. I don't have anything against playing a father, but for the typical father in drawn out tele serials.

Are you a father in real life too?
No, but I am married like Aditya. (Laughs)

Really?! Tell us more about her.
Her name is Shilpa. We met during my theater days. Even she is into theater.

Tell us about your on-screen wife Prabhleen.
Prabhleen and I share a great working relationship. Since she is more experienced than me I get to learn a lot from her. Even she is generous about giving tips to me. I am an introvert while Prabhleen is a total extrovert. At first I didn't even know how to behave around her. I was that nervous during my first day! But later on, the ice broke and now we share a great rapport.

How do you get along with kids on the show?
Well, Zayna is not at all a difficult child. She is very obedient, so makes things easier for me but Abhishek is very naughty. He does a lot of mischief and when we try to scold him, he cracks a joke on the spot and makes us laugh. No one can really get miffed with him.

wwwroyalmag_net 13 years ago i think he's great. i want to feature him on my web publication magazine.

13 years ago much needed on this actor. He is mindblowing in Aap ki Antara

13 years ago when I first saw him I thought he was the same actor who came in mamta.

13 years ago Brilliant actor and great show. Thanks for the article.

Parasaathi 13 years ago Great Superb Actor...He looks acting and mostly all can be Big B when he was young

+ 2
13 years ago At last Aditya verma's interview...i have been waiting for it! He is really brilliant in the show! He suits the part 200%. and of course he is sooo handsome!