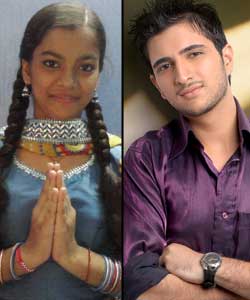 Every week Sony TV's Crime Patrol: Dastak brings a series of real crimes and cases to its audience. Soon, two young television actors would feature in one of the episodes.

A source reveals, "Nivin Ramani, last seen in Maryaada Lekin Kab Tak? as Chinu, and Nidhi Jha, currently seen in Balika Vadhu, would be seen together in Crime Patrol. They will essay Veer and Priti respectively."

"The story is about a girl who has gone missing from her uncle's house. Meanwhile, her aunt is found dead in the house, Veer is suspected to be behind the Murder, as he was also in love with Priti. But as per the village decree, the girl and boy cannot marry each other as they share a same 'gotra'," signs off source.

The shoot is taking place since few days and the episode will be aired sometimes in the next week.

We contacted Nivin who comments, "I can't reveal anything at the moment."

With this episode a new case comes into the limelight!

+ 4
9 years ago Crime patrol is an awesome show. Wish it had more re-run time slots cos it runs so late at night over here...

+ 2
11 years ago nice! now u need size zeros and sensual scenes to get people to watch a movie! nice music but def not looking forward to the movie..!

11 years ago when someone like neha dhupia, mallika and rakhi sawant does something is called cheap and there is big halla over our cultur etc but for karena it's ok .. hypocracy... don't like her after tashan .. used to like her before that but after her being with saif .. not at all interested in this cheap stuff

+ 2
11 years ago if it was Mallika sherawat den ppl find its cheap..but one of these stars dose den its classy..grrrrrrr...hate this both..

+ 3
11 years ago frankly speaking i have never like kareeen nor Saif, i'm not looking forward for this show..

+ 3
11 years ago personally i find the poster fascinating, i like kareena and saif, and what i love about this poster is the fact they look very comfortable in what they are doing and for god's sake she is not showing anything disgusting there... personally i am soo looking forward to this movie...!