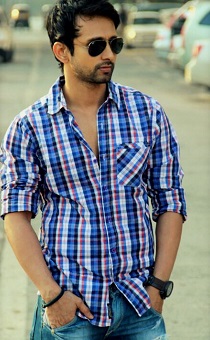 Actor Nivaan Sen, who has been roped in to play a pivotal role in Zee TV's popular horror series Fear Files met with an accident while shooting for the episode.

Nivaan got injured while shooting for a chasing scene. He had to run but something happened because of which Nivaan banged himself on the glass door. He has injured his head and his shoulder.

When contacted Nivaan, he told us, "I had to run towards a door for a sequence but suddenly I felt that something got stuck in my leg while running and then suddenly everything became blank in front me. I banged onto a glass door and the glass pieces hit me on my head and shoulders. The shoot had to be stalled then and everybody on the sets got scared and they asked me to go to the hospital. I had to finish my shoot so I applied ointment on the sets itself, finished my shoot and then went to the hospital to get the necessary treatments."

He is very grateful to the production house people who were very co-operative and supportive towards him, "The production people have been very co-operative towards me. They kept on telling me to go to the hospital but I preferred to finish up my shoot first rather than going to the hospital. Something major could have happened but I am very thankful to God that nothing major happened and my life is saved."

We wish you a speedy recovery Nivaan!

nmahadur 6 years ago hey Nivaan like ur perfomance alooot...hope to see u more n more :)

Salman Khan's Official Statement about his Connection with ...
11 minutes ago

Naagin 5: Veer to return to destroy Bani and Jay?
51 minutes ago