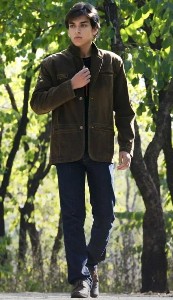 Nishant Raghuwanshi, a fresh face in the television industry who made his debut with Hat Off Production's Chhoti Si Zindagi as has bagged a meaty role in Trilogy's next on Zee TV.

It Seems like Nishant has his good fortune associated with the channel as right after Chhoti Si Zindagi on Zee TV, he will once again make his presence on the same channel.

A source informs, "Nishant Raghuwanshi will play Manoj who is a smart guy and will be seen flirting with Indira (Rati Pandey). He is also the nephew of Indira's boss and an employee of the office. But instead of working, Manoj is more interested in flirting with Indira."

We contacted Nishant Raghuwanshi and he confirms, "Yes, once again I am on Zee TV as I portray a fun character in Hitler Didi."

Hope Hitler Didi appeals to the audience and proves to be lucky for Nishant yet again...

9 years ago All the best Rati for your new show

just wish if Arjun Bijlani were there in this show

+ 4
9 years ago lol iam so glad that choti si zindagi is tagged in this article. now its ranking will go up thanx to Rati fans. thanks Rati. u rock