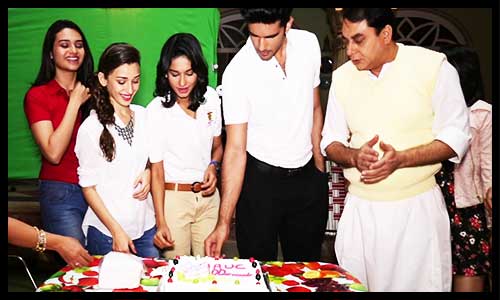 Sukesh Motwani's popular show Nisha Aur Uske Cousins on Star Plus is rejoicing the moment of completing 100 episodes. The hard work of the actors has been paid off as their acting has been immensely appreciated by the viewers.

Nisha Aur Uske Cousins which showcases the bond between the cousins has garnered fame and won hearts of the viewers with the fascinating storyline of the show. The team celebrated this occasion with a cake cutting ceremony on the set.

We contacted the Aneri Vajani who essays Nisha to share her happiness and she says, "It feels great to complete 100 episodes, for us it feels like its our first day and now it has completed100 episodes. I remember how we started shooting in Jaipur which was crazy and it quote nice to share a great rapport with co-stars. I got to do so many stunts which I would never have done. I got to meet amazing people like my producer, my director and my creative, itâ€™s been like a craziest journey. I fell sick, fractured my leg but at the end I am really glad that people are loving the show so finally it is that mehnat ka phal humein mil raha hai.â€

â€œI am glad that people love the show and hope people keep watching the show, thank you so much for loving the show. It feels great to complete 100 episodes, itâ€™s a superb feeling and would thank all the viewers for appreciating our show,â€ concludes Aneri.

6 years ago Missing the Lakshya Academy days! They were just magical. Taher Shabbir was just amazing as the ace-shooter!

6 years ago This Track of Lakshya Academy was mind blowing . Taher Shabbir is amazing as the a national level shooting champion ViRaj Singh Rathore

+ 4
6 years ago Loving the show and all the current tracks. May we get many more 100's ! Best of luck NAUC team

6 years ago Congratulations to the entire team for completing 100:) Looking fwd to proceed till 1000:)

+ 5
6 years ago Congratulations to the NAUC team for 100th episode! Its a wonderful show with family warmth and relationships.