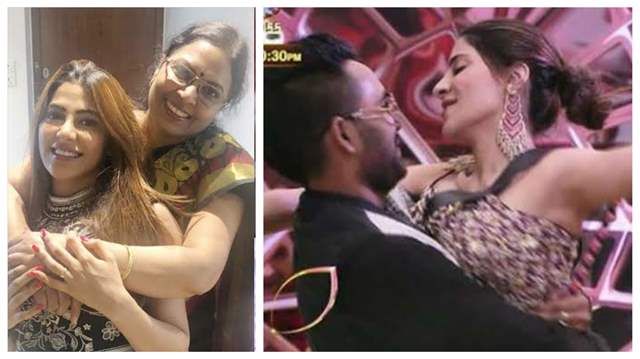 Bigg Boss 14 continues to be a fest for all th fans out there and there is indeed so much going on with all the contestants in there. One of the talking points and controversial contestants in the show has been Nikki Tamboli. Only yesterday, Tamboli was slammed yet again by Salman Khan for her constant badtameezi towards others and that has been the case with her almost constantly throughout the season.

On that similar note, Tamboli also received some flak earlier when she made allegations that singer and former Bigg Boss contestant, Jaan Kumar Sanu was 'forcibly kissing' her.

While she received negative reviews for that too and Sanu was understandably furious; Tamboli's mother Pramila Tamboli went on to talk about it in an interview with SpotboyE.

She said, "What she did with Jaan Kumar Sanu was for him only. Jaan's mother must have felt bad and it's normal after all she is his mother but Nikki has not done anything wrong with him. Jaan ko apne se door karne ke liye usne ye sab bola. When Nikki had come out after her eviction on the show I had spoken to her and she told me, “Mummy, Jaan is a really nice guy. He is a simple man and I can't even think of cheating him. If I would have not done this he must have got involved with me more deeply which I didn't want. Aage jakar uska dil toot jata to usko bhaut bura lagta.”

She added, "Nikki wasn't aware that how many days Jaan will Jaan be in the house for. But if they would have stayed together he may have got more and more involved with her. She said I want to make my career and lot of people will come my way but I can't get involved with them na. But I corrected her by saing 'thodi si zyadti hogai tujhse' to which she replied 'agar main zyadti nahi karti to vo mujhe nahi chhod pata.”

About making such accusations on national TV, her mother said, "Nikki told me it is very difficult to make him understand anything. And as a viewer I will also agree to it. Because in the episodes we have seen how Nikki has made it clear to him about her feelings, also went on calling him Bhaijaan. So he should have understood at that point only. She always kept it clear that he is just a friend to him. But he was not ready to understand that. So she decided to break his heart now than later.”