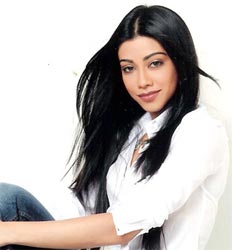 Many names have been doing rounds as part of 'Jhalak Dikhla Jaa'. Show that has changed allegiance from Sony TV to Colors, is a a very popular dance show and enjoys a very dedicated fan following.

Tellybuzz brings you one more name that has been approached as a 'Choreographer'.  The production house has approached Nicole Alvares, ex 'Jhalak Dikhla Jaa fame', to be a part of the show.

Nicole was last seen in Sony's 'Jhalak Dikhla Jaa' ,where she was paired with Karan Singh Grover. Supposedly , the dance rehearsals had seen both of them dancing ting.o a tune of attraction and sent the sparks fly.

Telly Buzz contacted Nicole and she confirmed the news -," I have been  associated with Jhalak for the past 3 season and I have been approached this year as well , but I haven't yet decided whether to take it  up.  I am already tied up with many things, but let see how things  shape up."

Apart from Nicole other Choreographers who been approached for the show are Shampa who paired with Sushant Singh Rajput, Deepak winner of season 1 and Savio who paired with Mahhi Vij last season.

+ 2
8 years ago Sushant and Shampa were the only pair who showed their amazing presence... they r the best...

+ 5
8 years ago to be frank, I opened this article only to read the comments which I knew wud be some brilliant entertaining stuff. carry on girls while I munch my popcorns, rofl

born_to_win 8 years ago sushant and shampa deserved to win last season. they were the best.

8 years ago SHAMPA IS THE BEST ! SHUSHANT ANS SHAMPA DESEREVED NO1 LAST SEASON.

SSRfan 8 years ago sushant and shampa's performances were a treat to watch. hope shampa participates in this season as well.

love u ksg...
ur name itelf it enough to tell people wht you are...
u r the best actor nd hottest man alive

8 years ago sushant and shampa were fabulous in the last season. ATB to shampa for this season as well!!

8 years ago Sushant & shampa were the best...i'm sure no one can touch their level.