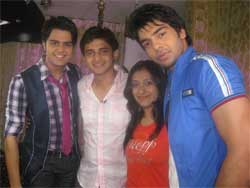 The newly weds, Romit Raj and Tina Kakkar will appear on television for the first time in Zee TV's Ghar Ghar Mein, which will provide a sneak-peak into the couple's life!!

Romit and Tina have already shot for the episode, and it will be aired soon.

When contacted, Romit said, "It was great fun to be part of the episode with Tina. We had a great time with the entire team of Ghar Ghar Mein. We talked about the manner in which we met, got married and about the memorable moments in our life so far. On the whole, it was a superb experience. We played games like Narial pani. We were accompanied by my close friend Hemant Thatte".

Ask him about Tina's first experience before the camera, and he said "She was very comfortable, and it never seemed that she was facing the camera for the first time (smiles)".

The couple got married in Pune on March 28th. The episode will be aired very soon.

Nadz_YuNalover 11 years ago all the best srk u rock! love you coz you love your family so much that shows how gud as a personality u are! thats why i always love u!

SuKk_forever 11 years ago Wow...he is so sweet just to do this for his son!!!the movie sounds interesting....and ofcourse SRK can do any role....so looking forward to this!

KING-SRK 11 years ago SRK is so talented he can give 100% justice to any role who cares abt the age he is still looks like 20s. Love you SRK. He will definitely rock, tks for the news.

halley 11 years ago srk u rock!!!!!!! lets cc the superhero of the rocking khan

Kai. 11 years ago i think it''s high time SRK acts his age....Spider man aka Peter is always shown as a university geek ...who helps the world from bad guys but fails to impress his ladylove!

I think the best choice wud be Shahid....he has the chocolaty looks good physic....& he is young! ......even Hritik wud be a good choice tooo...but not uncle SRK!

simtara 11 years ago I''m all for anything by SRK [:)] It''s great that he''s doing Spiderman in a big way - we''ve already had a Bhojpuri version, so no doubt the Bollywood version will be great as well.

As far as age is concerned... if George Clooney can be Batman...SRK with his new trim physique can certainly pull a Spiderman! [:D]

The only other actor I can actually see pull of such a role would be Hrithik. It''s not just a matter of physique either..it''s personality as well, and I think SRK''s got the perfect combo. Bit of a Clark Kent... actually would love to see him as Superman too! [;)]

Akshay Kumar Breaks his 18 Year's Rule; Shocks Everyone
54 minutes ago