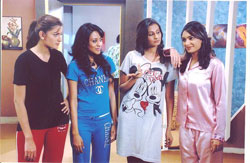 Actress faints on the sets due to weakness! Television lead de-hydrated! Star collapses after diet gone wrong! These are some of the common stories doing the rounds in the television industry of late. So what are the production houses doing in order to combat with this latest discrepancy occurring on the sets thereby delaying the shooting schedule?

The latest buzz is that to avoid such fainting episodes, Zee Next’s Simplly Sapney team has taken up the responsibility to ensure the good health of its young artists. Though the artists are happy about the new health fad, they are not entirely pleased to have glucose after every hour. As Vaibhavi Upadhayay (lead of Simplly Sapney) says, “Not that we are not happy with this new decision. It is an excellent idea. But we were a little fed up of having glucose water every time as it was too monotonous. So we opted for tea coffee and Red Bull instead.”

And what is her take on actresses fainting on the sets nowadays? She claims, “It’s true. A lot of actresses do fall sick on the sets. This is mostly because we have such strenuous schedules and are constantly shooting. Few days I experienced a similar weakness due to the late working hours I was putting in for shooting.” So what should the production house do to deal with such a situation? “The production team should always keep few medicines on hand,” says Vaibhavi. “If it is too serious then the actor should be given a break of a day or two.”

As advice to all her colleagues in such situations, Vaibhavi says, “My advice would be to keep yourselves hydrated by drinking a lot of water and eating fresh fruits. And keep smiling because that’s the best remedy for any illness.”