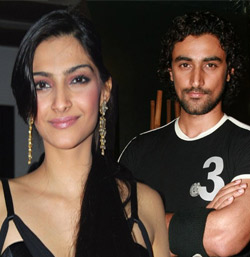 Looks like Sonam Kapoor has found her new love in Kunal Kapoor. This Bollywood Kapoor Jodi is nowadays often scene roaming around coffee shops, malls, etc with hand in hand. Looking at the recent happenings in both the stars life they really could heal each others broken heart. Where Ranbir Kapoor dumped Sonam for hottie Deepika Padukone, Kunal Kapoor too had a break up with gorgeous Dia Mirza. So the couple could surely understand each other’s situation and try to bring happiness on their respective lives. Especially, Anil Kapoor’s daughter Sonam was so depressed after her break up with Ranbir that she went for a 2 months hideout. But we would like to warn this emotional girl about Mr Kunal who has not only ditched Diya Mirza but also has an flirtatious history of dumping Raima Sen. Being an emotional girl we would recommend Sonam to think twice before moving ahead in her relationship with this flirt natured guy.
Featured Video