As the excitement amongst viewers to get a glimpse of Prem and Heer post leap in Star Plus' Kis Desh Main Hai Meraa Dil increases, we give you more information on the new entries that will be seen from tonight. 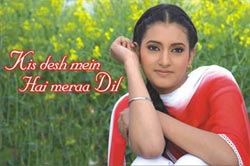 Featured Video
As we had reported earlier, there will be four kids in the show. "Ananya will essay the role of Tanu who will be the daughter of Prem and Heer. Rishabh will essay the role of Arjun, while Mahi will play Gungun. Rahul will play the role of Ketan. Two of the kids will be of Preet and Meher, but they end up giving one kid to Harman. Not much is known about the fourth kid entering the show, but, this might be the kid that Ashlesha (Mihika Verma) brings in as son of Prem", informs our source.

"The story line post leap has been kept under wraps, and is being supervised by Ekta herself. There are many interesting twists to be expected in the plot after the six year leap to be shown in the show", states our source.

We called up Mihika who was clueless about the happenings, and said, "I have not shot for Kis Desh after my scene with Prem in the bed room. I really do not know about the story ahead".

Well, as of now, the countdown begins for yet another leap in an Ekta show…

11 years ago All the best Additi and enjoy your time off :D

11 years ago Missing Prem , Heer and everyone. love this show

13 years ago they didn,t show us about meher has given her son to maya,yet.

+ 2
13 years ago I'm confuseddd.....lol. why split prem-heer??? this leap reminds me or kkusum b/c the leads are seperated. it was after this leap in kkusum the show went downhill! even the lead nausheen left. i hope the same doesn't happen to this show!

13 years ago I dont get it......Premeer arent together rite? then how do they have a kid??

+ 2
13 years ago this article is so confusing..cant get which kid is which..only understud ketan...
n tanu is kul di's daughter!

13 years ago y they r playiing with the serial? dis all is non-sense