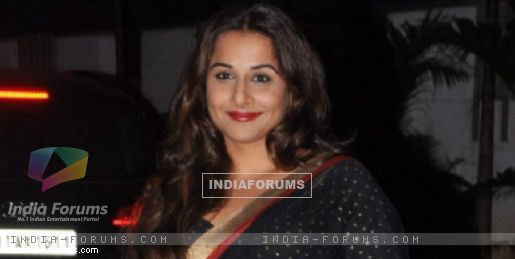 "I never thought that in my career I would do a film with Vishesh Films because the kind of films the banner makes are very different from other films, for some reason. So I was thrilled when I got a call to be a part of this film," Vidya said here on Friday during the promotion of her film at radio station.

Directed by Mohit Suri, the film also stars Emraan Hashmi and Rajkummar Rao. It is an intense love story which is inspired by the life of filmmaker Mahesh Bhatt's parents.

Vidya is happy that she got the chance to do a romantic film after a long time.

"I have not done a love story after 'Parineeta', but this is a beautiful intense love story. I am glad that I am a part of this film because it is very special for me in many many ways. One of the reason is Mahesh Bhatt saab. He gave up direction before I became an actor.

"On this film, I have got the chance to work with him because he has written the film. Another reason is Mohit (Suri) as he has that ability to touch you, to stir you and to move you through all his films, and that is what this love story require. And of course Emraan Hashmi, with whom I got a chance to work with again," said Vidya, who had earlier teamed with Emraan for "The Dirty Picture" and "Ghanchakkar".

"Hamari Adhuri Kahani" is slated to release on June 12.