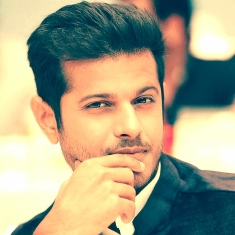 Actor Neil Bhatt who is already doing Diya Aur Baati Hum with Shashi Sumeet Mittal has signed their next show coming on Zee TV as a lead.

We hear that the story is of four brothers and Anand Suryavanshi, Mohit Malhotra, etc have already been signed for the other characters on the show.

Our source informs us, "Neil will be playing one of the leads and his character's name is Bushan who is a fun loving and responsible guy. Bushan loves his family unconditionally and can do anything for his family."

When we asked Neil he confirmed saying, "Yes I am doing the show but its too early to talk about it now."

We hear that the show is slated to air in the first quarter of next year.

+ 2
6 years ago So happy to hear about your New,show Neil. Will be lovely to see you in the lead once again. All the very best to you.

Harsh.Garg 6 years ago thanks for sharing the info. you can get more info about the show on ITSMEBRO.com or Search about it on google By entering "Pethawala Serial"

6 years ago Neil sooo happy to hear abt ur new show...looking forward for it eagerly...loads of luck n good wishes...

6 years ago Congrats and all the best neil

6 years ago I do not watch DABH but this guy makes his presence felt in whatever glimpses from the promos I have had.
Way to go Neil.

6 years ago which of zeetv's show will go off air then?

wishing all the best to neil