TellyBuzz had recently reported that Mouni Roy will be stepping into Star One's Geet Hui Sabse Parayi as the protagonist Maan's (Gurmeet Choudhary) blast from the past. 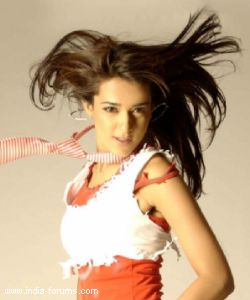 The latest is that the creatives have delayed the entry of this character, Sameera who is supposed to be Maan's ex-girl friend. Instead, the makers are bringing in a girl who will play cupid to Maan and Geet (Drashti Dhami).

Neha Jhulka who is a popular face on Star One, courtesy her role of Naina in Dill Mill Gaye will soon be entering Geet.

We hear that Neha will play the character of Parineeta, fondly called Pari who is an extremely positive character.

Our khabroo tells us, "Parineeta will be the girl Geet chooses for Maan. There will be some light moments shown, but the end result will be that Pari becomes a catalyst in bringing Maan and Geet closer".

When contacted, Neha Jhulka confirmed the news and said, "Yes, I am back to Star One with Geet. This is a cameo role, a very cute one wherein I play an extremely positive character. I will be starting shoot in a day or two".

Neha was to start shoot earlier, but things were delayed due to Gurmeet's illness. Gurmeet who has suffered a setback due to malaria shot for some close-up scenes at his home yesterday. We hear that he has resumed shoot today, and Neha will be starting shoot very soon. Her entry sequence will probably be aired in Friday's episode.

7 years ago Drashti Dhami You are the best...You can make chemistry with anyone
love u so much

+ 2
7 years ago Finally, my super girl is taking a break, well deserve holiday
No Work
Only Masti
Keep Rocking my Princess..
Love u so much Drashti Dhami

+ 2
7 years ago Drashti Dhami you did amazing job as geet and made a beautiful pair with GC..
LOVE U

+ 2
7 years ago Drashti Dhami you are the best!!
Love you alot. Always loved your expressions...*

8 years ago drashti you are very very beautiful. you are my rock star. i am eagerly waiting for your great show. please come soon on screen. you are the best