Though Mandira has been active on the anchoring front, she has been on holiday from television soaps.

'Negatives roles are a strict no for me. We all have shades of grey to our personalities, but the serials today offer either a black character or a totally white one,' she said.

What are the plans for her birthday? 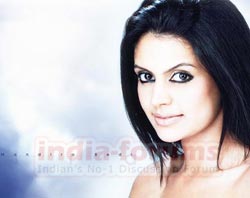 'I have been working really hard for quite sometime now. So on my birthday, I will stay at home, which is by the beach and relax in my pool,' she told IANS on phone.

Her last stint with TV serials saw her playing the vamp 'Mandira' in STAR Plus' 'Kyunki Saas Bhi Kabhi Bahu Thi'. Earlier in 1995, she was noticed as the protagonist in Doordarshan's daily serial 'Shanti'.

'I would immediately opt for a role like 'Shanti'. Even though there are many offers coming my way, I won't take up a show until I get a role like that,' she said.

'I enjoy anchoring to the hilt as you can be yourself on TV shows unlike in movies where you have to play a fixed character,' she said.

While she has hosted many reality shows, Mandira is not too keen on participating in one.

'Singing and dancing is just not my forte, so I don't think I will be a part of a reality show, but I do enjoy anchoring it.'

Her forthcoming projects include director Sanjay Jha's 'Mumbai Chakachak' and Chandrakant Kulkarni's 'Meerabai Not Out'.

'In 'Mumbai Chakachak', I play the role of an independent woman who works for an NGO and only follows her heart whereas in 'Meerabai Not Out', I play a cricket crazy woman,' she revealed.

Mandira shot to fame for her noodle-strap blouses while presenting 'Extra Innings' on TV during the 2003 and 2007 Cricket World Cup. And she feels that more women started appreciating the game because of her.

'Cricket was once just a sport and today it is also about entertainment. Earlier, it was not considered a family entertainer, but I believe that when I got associated with it, more women also started watching it,' she said.