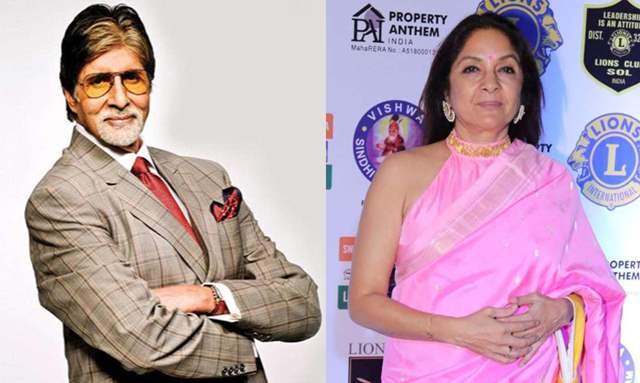 In a surprising turn of events, the makers of 'Goodbye' recently announced the casting of ace actress Neena Gupta. The film which recently went on floors will see the Baadhai Ho actress performing alongside the legendary Amitabh Bachchan and south-sensation Rashmika Mandanna.

As reported earlier, Neena Gupta will be essaying the role of Big B's wife in the film and this is the first time she will be seen opposite him.

A recent SpotboyE report quoted a source close to BigB who said, “In recent years he has been progressively feeling the scarcity of co-stars. Actresses like Jaya Prada and Dimple Kapadia have been paired with Bachchan Saab once too often. He needed a fresh co-star, and Neena Gupta seems just right.”

The Piku star saw Neena’s career-changing performance in Badhai Ho and wanted her to be his co-star, reported SpotboyE.

“That time has come now. Mr Bachchan and Neenaji would be the hottest autumnal couple since Clint Eastwood and Meryl Streep in Bridges Of Madison County,” said a friend of Amitabh Bachchan Bachchan.

Speaking about the same, Neena said, "I am very excited and nervous and happy about working with Mr Bachchan."

Previously, Bachchan had even showered praises for Neena Gupta in a hand-written note appreciating her performance in the 2018 film Badhaai Ho.

In a career span of almost three decades, the actress has starred in several critically acclaimed film. She had earlier worked with Ekta Kapoor on the commercially successful film, Veere Di Wedding and Goodbye marks the second film for the duo.