Featured Video
‘Tyohaar Ki Bahaar’ will feature song and dance performances by television’s leading stars on songs that have become symbolic to the celebrations during these festivals. Naman and Megha will kick start the event with an energetic performance on the song Rang De Basanti commemorating the ‘Yellow’ festival ‘Basant Panchami’, the Hindu festival traditionally celebrated on the first day of spring. The ‘Yellow’ festival is marked with people usually wearing yellow garments, Saraswati worshippers dressed in yellow and yellow sweets being consumed within the families.

On Sankranti, the Gujarati's offer thousands of their colorful oblations in the form of beautiful kites all over the skyline with great devotion, fervour and gaiety. Surveen and Chaitanya will perform on Kaipoche, a song that best depicts the festival. The festivities get in to full swing with Krishna, Shweta and Eijaz raising the tempo to celebrate Baisakhi, a festival that marks the harvest season in North India. The trio will bring forth the Punjabi spirit through songs like Balle Balle, Tere Roop Di Gori Balle Balle and Nagada Nagada.

The artists will pay their reverence to the Gods with a well compiled feature on Ganesh Chaturthi and Janmasthmi. Naman, Megha, Chaitanya and Surveen will dance to celebrate the respective days when Lord Ganesha and Lord Krishna bestowed their presence on the earth for all their devotees. The Navratri or the nine nights of worshipping nine forms of Shakti (Metaphor for Goddess Durga) is celebrated with vigour and fervour in all parts of the country particularly in Western India. Ketki and Krishna will groove to the Dandiya beats on songs like Chalo Dheere Dheere, Odhni Odhu To Udi Udi Jaye, Aayo Re Mahro Dholna and Halo Sambho

Durga Puja, the largest Hindu festival in Bengal, is celebrated over the preceding nine days of Navaratri. The festival is traditionally viewed as the coming of the married daughter, Durga, to her father, Himalaya’s home. Eijaz, Shweta and Ketki will dance to some of the big Hindi film hits like Maa Sheravali, Dola re Dola and Jai Ma Kali dedicated to the Goddess.

Eijaz and Krishna will conclude the revelries for the night with an enthralling performance celebrating the end of Ramadan, the Islamic month of fasting. The two will celebrate Eid-Ul-Fitr with dance performance on the recent hits Khwaja Mere Khwaja and Dekho Chand Aaya

Apart from the electrifying performances, ‘Tyohaar Ki Bahaar’ will also enlighten viewers about the various facts about these festivals providing various insights relating to mythology, superstitions and unknown facts. 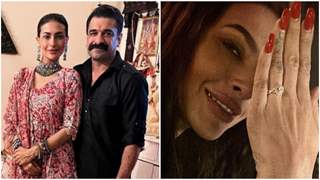 14 years ago omgggggggggggggg still under query ...when will its release....thnks